Juggling two very different careers requires careful balancing and self awareness. Professional organizer and singer Kay Patterson (known on social media as The Organized Soprano) shares how she does it–and has a lot of fun along the way. 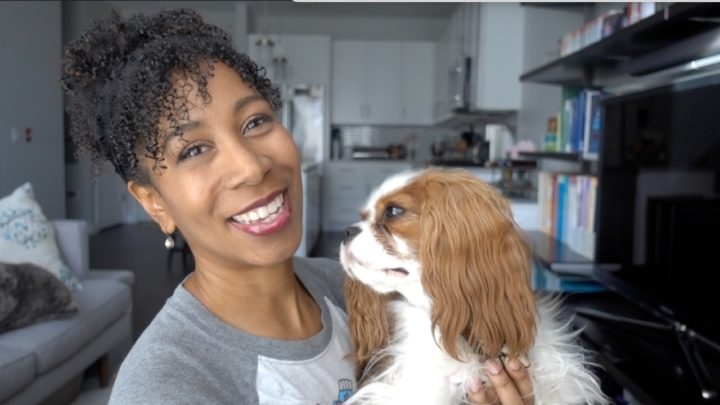 Getting productive with (and as) The Organized Soprano

Kay Patterson is a professional organizer and an active classical singer in the Boston, Massachusetts, area. She also hosts The Organized Soprano, one of my favorite YouTube channels, which often features her adorable dog, Clover.

In the past, Kay worked at the Container Store as a retail salesperson. Through her work there she discovered she had a talent and joy for helping people organize their homes, so she started a professional organizing business in 2013. A few years later (in 2016), she started her YouTube channel with one video she created for her clients in conjunction with the Container Store. She experienced unexpected success with that first video–and had lots of fun making it–so she decided to make more.

Kay also holds two degrees in classical vocal performance and has an active singing career. Having two different career paths can be challenging at times, and does involve some balancing, but Kay says she can’t complain because she has so much fun!

On days that Kay is working on her YouTube channel or her organizing business, she gets up around 7 am, takes care of Clover, eats breakfast, chats with her husband, and tries to get her work done early in the day before she has to go to her first appointment. She tries to stick to a consistent three-times-a-week filming schedule for the YouTube channel, which can be difficult. She’s the only person holding herself accountable, so she has to make sure to program times in her electronic calendar to film, edit, and plan.

On days when she has singing engagements, which usually happen in the evenings, she starts her day a little later and spends most of the day being quiet, drinking water, and taking care of her body because vocal performances require a much bigger physical commitment from her. She tries not to schedule other things when she has singing obligations. She’s learned over the years that there’s a limit to what you can actually do each day, as opposed to what you think you can do or want to do. After much trial and error, she now tries to limit herself to two or three commitments on any given day.

Although sometimes it’s unavoidable, Kay prefers not to do things in a given day that are too different from one another because it can be tough to change gears throughout the day. This past Mother’s Day, she took her mother-in-law to brunch, sang in a concert afterward, and recorded a podcast with her friend. Once she got home, she was exhausted.

Depending on the needs of her day, she tends to “wing” it, but she does have a couple of morning and evening routines mostly involving her dog. Taking care of herself at the beginning and end of the day is important to her. She does so by taking care of her skin, fitting in exercise, taking vitamins, and drinking water.

Kay’s biggest productivity challenge is underestimating how long a task is going to take. For example, she might think she needs only an hour to edit a video, so she blocks off that much time on her calendar, but it ends up taking two hours, requiring her to adjust her calendar. Once she makes this mistake with a certain task, she’ll make sure to schedule a generous amount of time the next time. This strategy has worked well for her. It’s key for her to realize there are a finite number of hours in the day, so she makes sure to prioritize her work and cuts out what isn’t important.

Kay likes to use technology like a personal assistant. She uses Waze, which is a navigation system that relies on real-time user data to provide traffic information. She has it synced with her calendar, so it tells her when to leave in order to arrive at her appointment 10 minutes early.

She also uses meal-planning apps in an effort to eat more healthily. She recommends Mealime because it’s free. The app will generate a shopping list for you, which allows you to spend 15 minutes at the grocery store to pick up everything you’ll need for the week. She also likes Instacart and Amazon Fresh because having groceries delivered allows her to save time and avoid being tempted to buy things she doesn’t need.

The other app Kay says she couldn’t live without is Evernote. Evernote allows her to upload files, jot down ideas, and tag them so she can find them later.

Some other apps that help her be productive are LastPass, QuickBooks, Genius Scan, Square, and MileIQ.

Tips or tricks to make your home functional

Kay says when it comes to home organization there are a few principles that work for most anyone despite personal differences.

One is to reduce the number of similar items you own if you aren’t actively using all of them.

Another is to keep things where you can easily put them away. A lot of people fall into the trap of making their organization systems beautiful and Pinterest-ready, but impractical or inconvenient to actually use. For example, if you are trying to decide whether to use bins or boxes with tops, consider whether taking the top on and off will be too much of a hassle for you.

The third tip is to have a high level of transparency about where things belong and make it very clear to help yourself as well as your family members.

The fourth is to work on developing a habit of putting things away the first time. According to Kay’s experience, 85% of being organized is just having the habit. A lot of people have bad habits such as walking in the door and throwing the coat on the chair. If the weather is different from the day before you may pull out another coat from the closet and the next thing you know, you have five different coats on the chair.

Another tip is to keep a basket where you can throw stuff in temporarily to contain the mess. The key is to keep the basket small enough so that there’s a limit to how much you can keep putting in there. One example Kay gives is her clothing basket in the closet where she keeps clothing items she’s worn once but doesn’t want to wash yet because she may wear it again soon.

This is more likely to happen to Kay when she puts too much on her calendar and has overbooked herself, or when there’s a mountain of stuff to do and she doesn’t know where to start. Her best coping mechanism in those circumstances is to put all the things she has to do on a list–but limit it to 5 items. The item that’s going to be the most labor-intensive or most time-consuming or the biggest pain will be the first item she tackles. She feels most accomplished when she has done the hardest thing on the list and can use that momentum to power through the rest of her list.

Another way she deals with the stress is to take a few minutes to meditate. Meditation helps her to change her perspective and is like pressing the reset button.

If nothing else works, she’ll take her dog for a walk.

What’s on the horizon for Kay?

Kay has several auditions coming up in the fall for vocal performances. She also has plans to attend a big summit for YouTubers in California this summer. This summer will be mostly about R&R for her, but her pace of work will pick back up in August.

Life is short so enjoy it! Pick your battles and do what you want to do now! If you want to do something unconventional, and you’re scared to do it, do it anyway and start right away! You don’t know what tomorrow is going to be like.

Do you have any questions for Kay or me? Please share them in the comments section below this post or in The Productive Woman Community Facebook group, or send me an email.

Kay Patterson is a freelance professional home organizer and active classical singer in the Boston Area. After obtaining two degrees in classical vocal performance, Kay discovered that she had more than one passion! After working as a salesperson at the Container Store for 8 years, she realized she had a passion and talent for helping others organize their homes and make their homes more functional and comfortable. She started her small business in summer of 2013 and continues her work today helping hundreds of clients organize their closets, kitchens, and more! She started her YouTube channel in 2016 with her first video “Storage Solutions for Small Spaces”… an 8-minute video where she featured the storage solutions she had come up with to live in her modest 750 square foot condo to save space and calm clutter. It quickly became one of the most popular videos on the subject on YouTube and it currently has over 250,000 views.

Kay’s YouTube channel, The Organized Soprano, currently has 14,000 subscribers and she has been having a blast sharing organizing solutions, cleaning techniques, and the many adorable antics of her co-star, Cavalier King Charles Spaniel, Clover.