The holidays are coming up and with them gatherings with friends and family who may not share the same views we do. In this episode we consider how to have productive and grace-filled conversations even when we disagree. 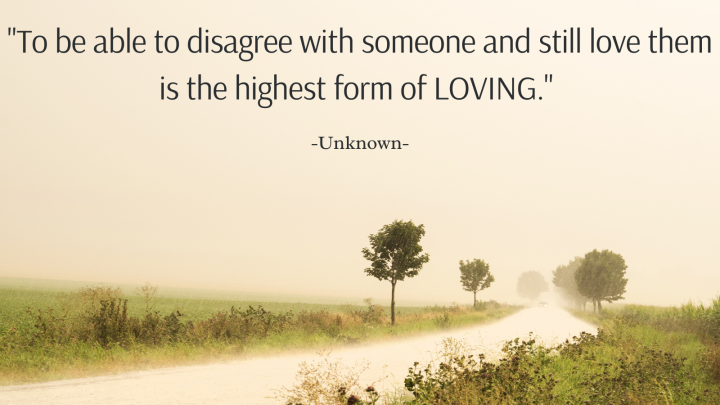 It’s possible to disagree while still showing love and respect.

This week’s episode was inspired by the Editor’s Letter, written by Editor-in-Chief Stephen Orr, in the November 2022 issue of Better Homes and Gardens magazine. In his Editor’s Letter, Orr talks about how we as people are becoming more and more siloed into smaller and smaller groups, segregated not by race but by ideology. As he says, “Everyone is algorithmically subdividing into tighter and tighter slivers of the media spectrum. What you read and watch is not what everyone else is experiencing. The ideas and concepts you’re absorbing daily may not exist outside your proverbial bubble.”

His opinion is that with the vast expansion of media and social media outlets, it has become easy for us to hear only what we want to hear, only what affirms what we already believe. Since that’s all we’re hearing, we can come to believe, without consciously recognizing it, that it is the only truth, the only rational way to think. It’s not a far step from there to believing anyone who believes anything else is wrong–and not just wrong, but worse. . . . We become isolated ideologically.

It’s not particularly insightful to note that this is having negative impacts. In a Psychology Today article, social ethicist and communications expert Melody Stanford Martin says it this way: “In our present political climate, many of us are experiencing a breakdown in our ability to engage the ‘other side.’ When these channels of communication fail, it can represent a significant loss to our relationships, our families, our communities, and even our democracy.”

As I read Orr’s Editor’s Letter and Martin’s article, I thought of recent Twitter threads I’ve seem in which dozens, maybe hundreds, of people proudly talk about how they’ve disassociated from family members solely because of what political party or candidate they support.

How to talk to people you disagree with

“How are we supposed to avoid talking about the important topics of the day without triggering the elephant in the room into full stampede mode?”

His answer: “approaching any edgy topics that arise with grace, as in the dictionary definition of ‘courteous goodwill.’” I agree. Following are a few thoughts to keep in mind as we consider conversations–whether at holiday gatherings or elsewhere–with people with whom we disagree.

First, and maybe most important: Relationships matter more than being right.

In the context of conversations at family gatherings, Orr says, “What matters most is not necessarily winning the argument or changing a person’s mind but realizing that the person you’re talking to is someone you love–or someone who is loved by someone you love.”

As Orr says in his Editor’s Letter, “the key is to be able to listen and try to understand where the other person is coming from.”

Melody Stanford Martin agrees: “Our goals in difficult conversations should generally be to 1) Protect the relationship with that person, and 2) to increase your understanding and increase the chances that you will be understood.”

In that quest to understand, ask questions–and listen to the answers. This helps us to understand why they believe what they do. Signals that you’re listening, that they’re being heard. And everyone wants to be heard.

What can you agree on? Start from there. We are all afraid–maybe just of different things.

Be careful not to dehumanize them.

See them as an individual, not merely as a member of a particular group.

Recognize that all people are multi-dimensional.

Be careful not to base your opinion of them on one aspect of who they are.

Take a step back from your own opinion and ask yourself: Is it really possible that every person who believes something you disagree with is ignorant, stupid, evil, or all three?

That’s what we’re assuming if we default to attributing bad motives or stupidity, for example, to the person we disagree with.

Martin in the Psychology Today article encourages us to avoid assuming the worst, but instead to “assume they have good intentions unless you have direct evidence to the contrary. Try to interpret what they say in a generous light, even if you plan to push back against their ideas.”

There’s good reason to do this. As Martin says (and I agree), “The vast majority of us want to be good. We want to fight for the best possible world and do the right thing. We may have different visions of how to get there, but it’s important to assume someone means well until we have definitive proof that they don’t.” (And note: voicing an opinion you disagree with is not definitive proof of bad motives.

Acknowledge how good we are at self-deception.

No matter how certain we are of our position, we should always keep in mind the possibility that we might be wrong–or at least not 100% right.

I think of something I once heard author Anne Lamott say: “You can be pretty certain you’ve created God in your own image if it turns out he hates all the same people you do.”

We are very good at believing that other people’s hatred is evidence of their bad character but our hatred is justified. But when you hate a hater, you become a hater. When you hate someone because you believe what they say is hate speech, you’re becoming the very thing you hate them for being.

What does this have to do with productivity?

If productivity is about more than getting stuff done, but about ordering our lives in such a way as to maximize our positive impact on the world around us, then how we interact with people we disagree with is an important piece of that. Our influence won’t be positive if our communication is aimed at condemning or proving wrong, and even less so if we withdraw and refuse to interact at all. We have no hope of positively influencing people we will not be in relationship with. No one has ever changed their mind in response to someone standing at a distance throwing rocks at them.

For those of us who want to be productive women in all the best senses of that phrase, I encourage us to lead by example. When considering the concepts regarding speaking to those we disagree with, we might find ourselves thinking, “but they . . .”–the idea being why should I do these things when they don’t?

What I remind myself is that I won’t let someone else’s words or behavior determine mine. No matter how aggressive or angry or even hateful someone behaves, I don’t have to respond in kind. If I want to be a productive woman–a woman who’s maximizing her positive impact on the world around me–then I need to be prepared to take the lead and go first.

And when you want to stop listening so you can react or respond or judge—which will be often!—mind that gap between what you know and what you most certainly don’t, and ask one more curious question. More often than you probably think, you might just find yourself saying “I never thought of it that way.”

I believe there is no hope for our society if we can’t re-learn the skill of disagreeing without dehumanizing. If we can’t learn to extend grace to the people we disagree with, to reject the idea that believing something different from you means a person is evil or ignorant or both. We must be able to talk, to learn from each other, and to walk in grace. Maybe we can start at the holiday gatherings this year. As Orr says in the Editor’s Letter:

“When we come together at the table this holiday season, the things that matter most won’t have changed, despite the state of the world. Being a good human is mostly about being good to others and thinking beyond ourselves. As social media herds us more and more into tight demographic pens, realize this is your chance to break out, to hear other views, to compare notes with someone on the other side of the aisle in real time, in real space. Human to human with no algorithms guiding the conversations.”

What are your thoughts on handling disagreements? Post your suggestions in the comments section below or in The Productive Woman Community Facebook group, or email me.

Tell a friend about The Productive Woman podcast. Share an episode using the social sharing buttons at the top of this post, and consider leaving a review on Apple Podcasts

« Productive Reading: Tranquility by Tuesday, by Laura Vanderkam – TPW420
A Few of My Favorite Things – TPW422 »