Seeking solutions to a daily parenting challenge inspired Joanna Parker to launch a business helping other moms. We chat about how she balances motherhood and entrepreneurship. 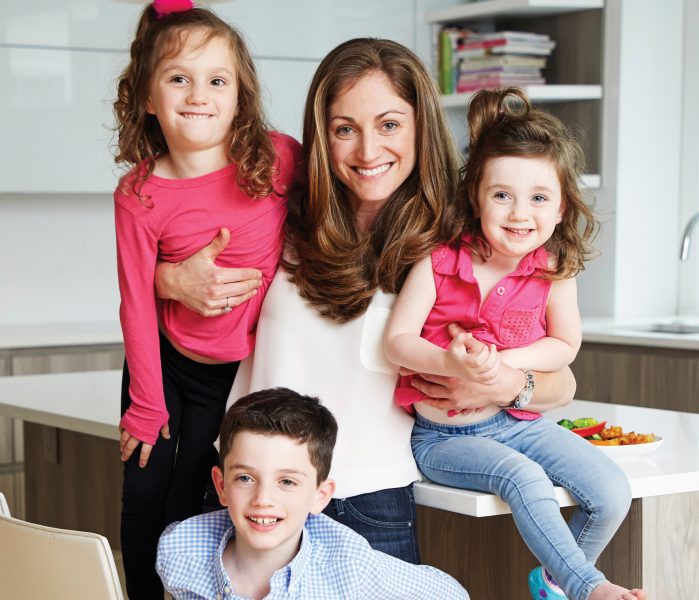 Balancing motherhood and entrepreneurship (and helping other moms do the same!)

Joanna lives in Englewood, New Jersey with her husband and three children. She is the founder of a company called Yumble, which is a weekly subscription service of fully-prepared, healthy meals designed just for children. Between spending time with her family and running her business, her days are very full.

Joanna starts her mornings with an early workout. She gets back home in time for her children to wake up around 7 am. From 7 to 8:30, she is 100% in “mom-mode,” having breakfast with them, getting everyone dressed, talking about their day ahead, and driving them to school.

At 8:30 am, she comes back home and puts her Yumble-hat on she commutes to New York City with her husband. She spends all day with her team in SoHo and drives back home around 6:30 pm. She has her end-of-day meeting with her husband/business partner on their drive back. They arrive at home around 8 pm and temporarily take off their Yumble hat to give their two older children some attention and check their homework.

Yumble really is a family project. She and her husband run the company together, and their children are the inspiration for the products. The family subscribes to the meals as well, so they like to talk about the meals as they come in the mail. Yumble was born from Joanna’s own efforts to get food on the table for her family. She knows it’s a big challenge to prepare healthy food that the children will actually eat, so mealtime can be stressful with children. One of Yumble’s missions is to alleviate mealtime stress.

At her wit’s end about meal-planning, Joanna threw out a question to a mom support group on Facebook to see how people would respond to the idea of having a week’s worth of cooked meals for their children. The response was overwhelmingly positive, so she cooked about 30 meals for her first 10 customers and put everyone else on a waitlist. A follow-up survey revealed that each customer wanted repeat deliveries the next week, and that’s when it dawned on her that this product needed to be a subscription.

Yumble is not a meal-prep kit service. Instead, it provides fully cooked meals, which allows moms to have healthy meals ready in 90 seconds or less. The idea was a solution to Joanna’s own struggle, so the resulting product is genuine.

Joanna’s children are still young, which means she feels the challenge of balancing motherhood and entrepreneurship. She had stayed at home with her two older kids, so she cooked them dinner every night and tucked them into bed, but she doesn’t get to do that for her youngest. With a routine set in place, though, she finds that her youngest child knows what to expect and embraces it. Setting up reasonable, reliable expectations for her children has allowed her to feel less guilty about not being present at certain times.

Joanna realizes that the modern-day mother faces the pressure to be a juggler. She recognizes that balls will be dropped, but that’s okay since she can pick the dropped balls back up or simply set aside the ones she can’t handle that week.

Her biggest challenge has been accepting that it’s okay to mess up. In the end, she knows her children will be stronger and more independent and competent because she’s not always there. (That being said, it doesn’t mean children won’t be independent because moms are at home.) What works for one person doesn’t necessarily work for another. Everyone should be confident that they are doing the best they can, whatever that entails.

Joanna is a list-maker. She makes lists about lists. She keeps her lists on her phone so she has them with her at all times.

Charts are another tool that Joanna loves using, especially to track her children’s behavior.

She also spends her Sundays planning her week and communicating to her children what the week is going to look like.  She does her best to stick to what she’s planned out because she gets flustered if things change suddenly for herself or her children’s schedule.

To keep track of her schedule, Joanna uses her Google Calendar and color codes the different areas of her life. The reminder function and repeat settings are very important tools for her.

Joanna and her husband have an hour-plus commute each way every day, so she uses this time to talk with her husband about various topics ranging from their kids to their business. On days that they do not commute together, the couple schedule a one-hour walking meeting to discuss the things on their agenda as well as get some fresh air.

Obviously, Joanna has outsourced cooking using her own company’s products. She also has a babysitter whom she trusts who loves her children like her own and is also able and willing to drive the children to and from their various activities. It helps that both her parents and her husband’s live nearby and are able to provide extra support and love as well.

The subtle expectation of women in the 21st century is that they should do everything and do it well. The demands placed on parents are practically endless regarding the level of education their children receive, how many languages they speak, what sports they’re involved in, whether they are eating healthily, etc. Joanna and I agreed that asking for and accepting help are skills that 21st-century women (and men for that matter) should learn.

Joanna admits that even with all these systems and tools in place, there are days when it feels like everything is crumbling around her. When that happens, she tries to remember that life happens and things don’t go as planned–and that doesn’t mean there’s anything wrong with you as a person or a mom. There will be ups and downs, and highs and lows. Recognizing that, she gets back up and tries to live as best as she can. Her children are the source of her strength to do that. When she walks in the house at the end of the day and her children run toward her shouting “Mommy, mommy!” that makes everything worthwhile.

What’s on the horizon for Joanna?

At Yumble, there are a lot of exciting new things rolling out, so she’s looking forward to those changes.

She’s also excited about being a spokesperson for Yumble because she believes she has a lot to share with the modern mother about juggling everything whether it’s healthy eating or general parenting hacks and tips or the struggles of parenthood. She wants to be a leader in the discussion of modern motherhood and helping parents alleviate the load they carry.

She’s also enjoying watching her children grow. Every day their topics of conversation become more interesting and they are developing into young people and she loves watching that unfold.

“It’s the first step that’s the hardest. Believe in yourself. Decide you’re going to do it. And just get started. Once you get started, the rest kind of falls into place. Overcoming that fear of “Can I do it?” is the biggest obstacle in anyone’s way.”

Do you have any questions for me or Joanna? Please share them in the comments section below this post or in The Productive Woman Community Facebook group, or send me an email.

Joanna Parker went to Columbia College and studied Art History. After graduating, she worked for a few years in Product Development at Macy’s and then became an elementary school teacher. After her second child was born, Joanna decided to stay at home with the kids for a little, but after 3 years she came up with the idea for Yumble and immediately began working on it full time. She lives in Englewood, New Jersey, with her husband David and their 3 kids Stanley, Eleanor, and Jane. She loves spending time with her family, cooking, and doing all things active!

Thank you to our sponsor Gusto for helping me bring content to you at no charge: